Kombu is the indispensible ingredient in one of the most important components of Japanese cuisine – dashi. Dashi, a versatile stock made with water, kombu and bonito, is used in a staggering number of traditional dishes like soups, stews and sauces. The quality of dashi gives any finished dish the sixth flavour of Japanese food – umami. 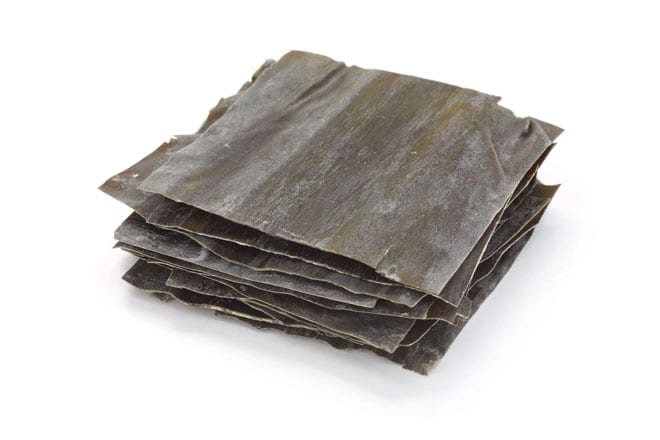 Other than dashi, this brown and wide seaweed has a myriad of uses. Firstly, it is sliced and cooked in stews and bean dishes. It can also be added to brine for enhancing the flavour of pickles. On top of that, you may even roast and grind kombu into a powder to season rice and soups.

More than 90 percent of Japanese kombu is harvested in Hokkaido. Taking place between May and September, its harvest is done by hand. Depending on the depth of the ocean floor, farmers use rods from 2 to 10 metres long to twist kombu out from its holdfast, and pull it out of the water.

Once harvested, kombu is cut, washed and dried on rocks. It is then aged from a week to a year, to enhance its umami qualities. After being packaged, it is graded. Although there are no national standards to grading kombu, in general, it is inspected for colour, damage, thickness, width and the amount of white powder (mannito, an umami component) formed on its surface.

When buying kombu, grade is not the only thing that matters. Kombu from different regions can also have unique characteristics that make them best for particular uses. For example, kombu from Rishiri is a hard type of kombu ideal for making tororo kombu – thinly sliced kombu softened in vinegar. Rishiri kombu’s sweet and savoury notes also make it perfect for making dashi!

On the other hand, kombu from Hidaka is a softer varietal that cooks faster, so you tend to see it used in simmered dishes such as kobumaki – fish wrapped in kombu and cooked in soy sauce, mirin, sake and sugar.