Try your hand at furoshiki, the long-lost art of cloth wrapping that is making a comeback in Japan.

Have you heard of furoshiki? The traditional Japanese fabric has long been used as an elegant alternative to wrapping paper. Often featuring beautiful designs and patterned with good luck symbols including cranes or fans, this square piece of fabric can be used to wrap all sorts of gifts. Made out of material like silk or cotton, it can also be tied in multiple ways to create different shapes, such as bags and bento box wrappers.
Until the middle of the 20th century, furoshiki was very much a part of everyday life. Its origin is said to date back to the 8th century, when people in the upper classes used it to wrap and carry clothes, gifts or other goods. The practice spread to the working classes during the Edo period (1603-1868), as public bathhouses became popular and people used furoshiki both to wrap their belongings and as a mat while they undressed. (Furoshiki, after all, literally means “bath spread”.)
When plastic bags were introduced in the post-war period, the time-honoured furoshiki practice almost disappeared from everyday life. But now, as more people become aware of the environmental damage caused by plastic bags, furoshiki has gained attention as an eco-friendly alternative to carry and wrap almost anything. In 2006, a Japanese Environment Minister even created a special furoshiki cloth, made from recycled plastic bottles, to promote its use in the modern world.

Knotty and nice
If you’re giving a Japanese person a present, consider wrapping the gift in traditional furoshiki for a special touch. Japanese people tend to put a lot of care into the appearance of a gift. What’s on the outside is just as important as what’s inside. There are even customs associated with furoshiki gift wrapping. Wrap it the wrong way and you might cause offence.

Furoshiki is a highly aesthetic practice, and many styles are prized for their intricate patterns and designs using colours that convey different meanings. As a result, colour plays a huge role in furoshiki gift wrapping. Red, for instance, symbolises strong positive emotions such as energy and vitality, yellow denotes beauty, refinement and cheerfulness, and blue denotes purity and cleanliness. On the other hand, white and black should be avoided, as they are funerary colours.

What also makes furoshiki special is the way that it is knotted and whether it is knotted correctly. You’ll find more than 100 various ways to tie a furoshiki, but the most fundamental knot of all is the ma-musubi (square knot). This knot is preferred because it is tasteful, strong and easier to untie. You’ll see other symbolism elsewhere in a furoshiki-wrapped gift too, such as in the number of pleats a furoshiki has. An odd number symbolises joy.

One furoshiki etiquette rule still leaves many Japanese tied up in knots. The reason for their confusion? Some say that a gift wrapped in furoshiki means that the receiving party is expected to give something in return, wrapped with the original furoshiki. Others believe that it is perfectly acceptable to keep the furoshiki since it is part of the gift. What is not up for debate: If you receive a gift in furoshiki wrapping, control your excitement. Do not open it in front of the giver. Instead, wait till you get home to unwrap the present.

At its heart, furoshiki is laden with meaning and remains a deeply personal gesture when presented as part of a gift. On its own, it is versatile, practical, eco-friendly and artistic. So it’s no wonder that furoshiki has evolved from its humble beginnings as a bath mat, and is now one of the most popular mementoes of Japanese culture and heritage. 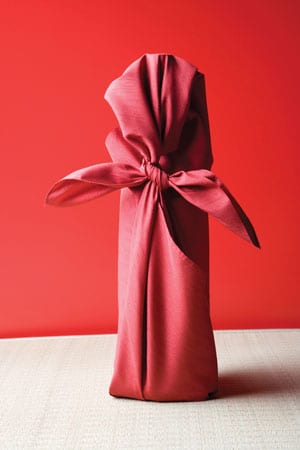 A cloth with plenty of uses

Furoshiki can range from small, hand-sized fabrics to huge, bedsheet-sized cloths, although the most common sizes are 45×45, 68×68 and 75×75 cm. Stylish and environmentally friendly, the versatile furoshiki can be used in myriad ways:
•Gift-wrap all kinds of items, from books and bottles of wine to fruit and flowers.
•Wear it as a scarf or bandana.
•Wrap and transport your bento lunch box.
•Use as a table mat for a picnic.
•Fashion as a shopping bag, purse or handbag.
•Display as a wall hanging.
•Transform it into a book cover.