With vibrant shades and tart flavours, the Japanese side dish is an integral element of traditional meals and complements a vast array of dishes.

When thinking about the ingredients of a quintessential Japanese meal, rich, miso soup and green tea typically come to mind. Tsukemono — also known as Japanese pickles — is often overlooked. 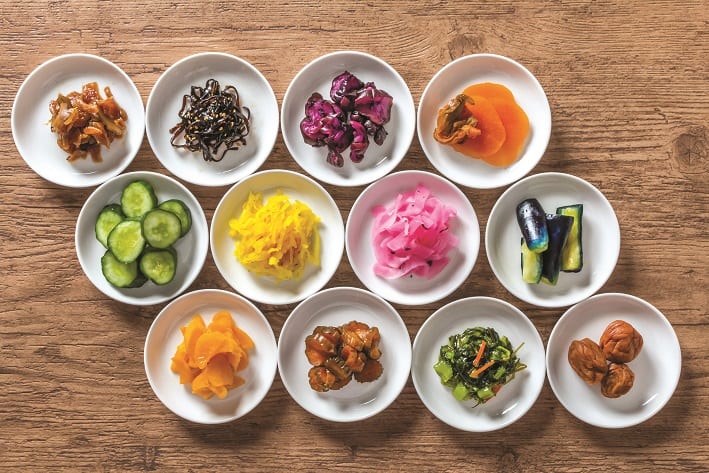 Yet it is a staple in the Japanese diet and served with almost every meal. Characterised by its versatility, it is used as a condiment, garnish, palate cleanser and even digestive.

The various types come in bright hues and are eye-catching, adding contrast to a meal’s colour palette and elevating its presentational value. Often, its tart flavours also provide a counterbalance to the heavy taste of umami-rich foods like fish, broth and meats.

Pickling made its first appearance as a means of food preservation way back in Japanese history during the Jomon period (14000 to 300 BC). During the era, salt would be taken from the ocean and used to preserve fruits and vegetables. As fresh vegetables were scarce during the winter season, tsukemono played a vital role in helping the Japanese maintain a balanced diet throughout the year.

Today, pickling techniques have diversified and evolved to become more sophisticated. Methods for making tsukemono range from salting and vinegar brining, to more complicated processes that include fermentation and cultured moulds. Vegetables and fruits of all kinds are used, ranging from cucumber and eggplant to carrot, plum, ginger, water lily roots, daikon (Japanese radish) and shallots. Fish and meat can also be preserved and pickled.

Shoyuzuke (soya sauce): Pickles preserved in soya sauce, often with vinegar and sugar. This method allows for different flavours, from light and umami to sweet and salty.

Suzuke (vinegar): Vegetables are left to cure in a rice vinegar pickling bath. The end result is a sweet and sour flavour and crunchy texture.

Miso: Made by covering vegetables in fermented soya bean paste, these pickles typically have a salty flavour. Miso is used to preserve meat and fish as well.

With each preservation method, countless tsukemono dish varieties are produced. Many can be bought at supermarkets and speciality stores in Japan and Singapore. Different regions in Japan also create variations using local ingredients.

Here are some tsukemono dishes you should know, from the more common to the unusual. 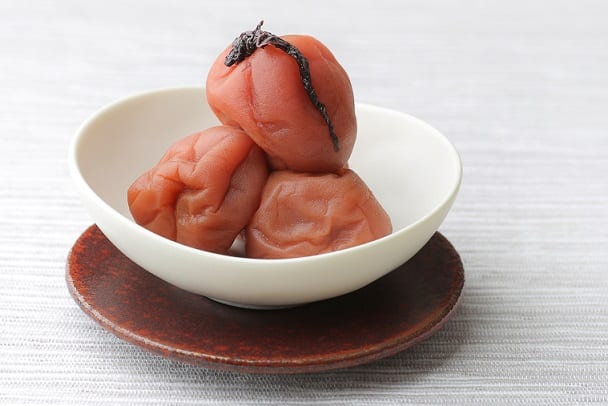 Also known as pickled Japanese plums, its salty and acidic taste packs quite a punch. Plums are potted with salt during the rainy summer season and left to dry out in the sun. They are then re-potted and stored for a year before consumption. Umeboshi is eaten with most traditional meals and is a common onigiri filling. 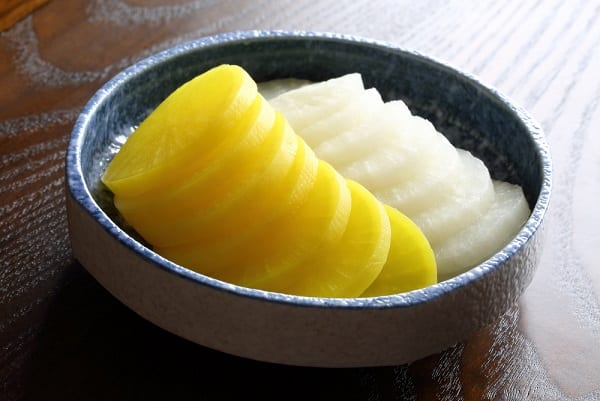 A crunchy radish pickle named after its Zen monk inventor. Radishes are sun-dried and pickled in a mixture of salt, rice bran and sugar, resulting in a sweet, crunchy taste. It is usually served alongside rice, or smoked and eaten as iburigakko in Akita Prefecture. 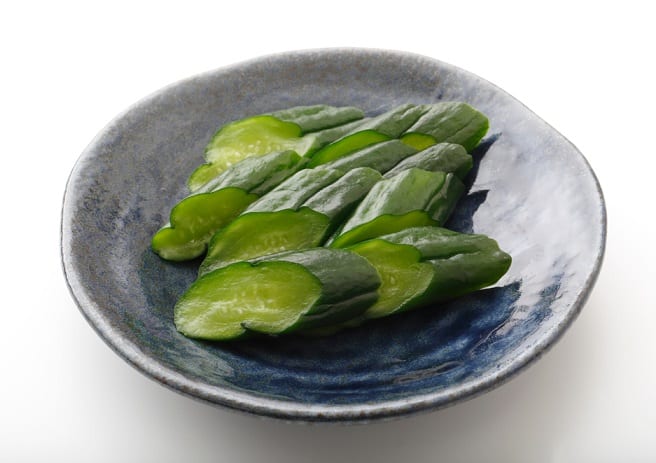 This simple dish consists of cucumbers marinated in a salt brine for around half a day. Seasonings such as kombu, togarashi pepper and vinegar are sometimes added. You can often find this served as whole cucumbers on a stick, sold by street vendors at tourist attractions or festivals during spring and summer. 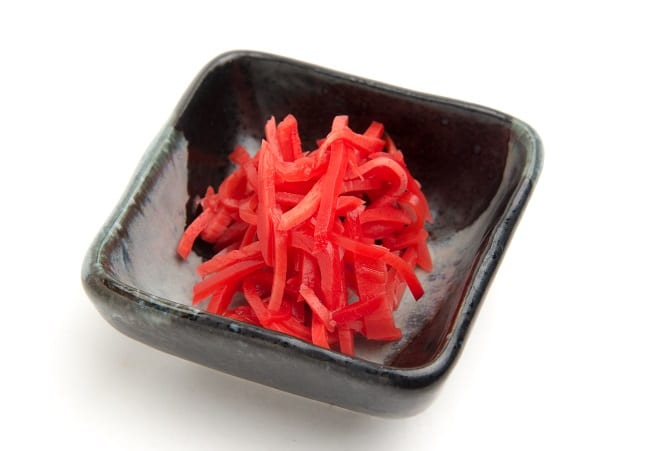 Made from julienned ginger root fermented in umezu, the brine leftover from producing umeboshi. With a sour and spicy taste, beni shoga usually complements heavier foods. This bright red (or beni in Japanese) pickle is commonly served as a garnish on gyudon, yakisoba, okonomiyaki, takoyaki and even tonkotsu ramen. 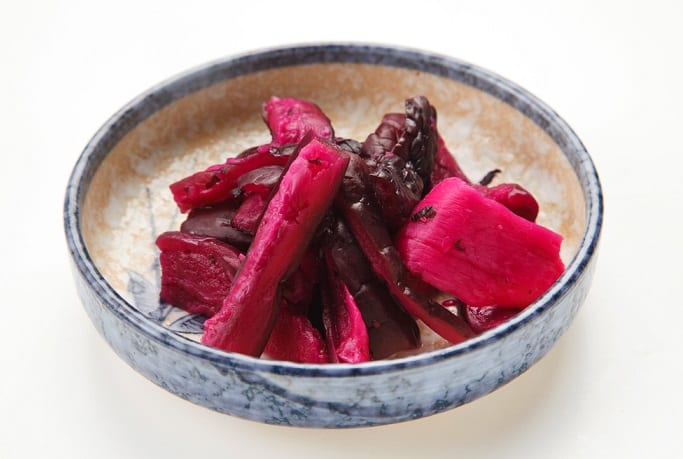 Originating in Kyoto, shibazuke’s eye-catching purple hue is derived from purple shiso leaves brined with eggplant and chopped cucumber. The pickles sit in salt until most of the liquid is leached from the vegetable and the colour permeates throughout. Salty and sour, the dish is best enjoyed with plain rice. 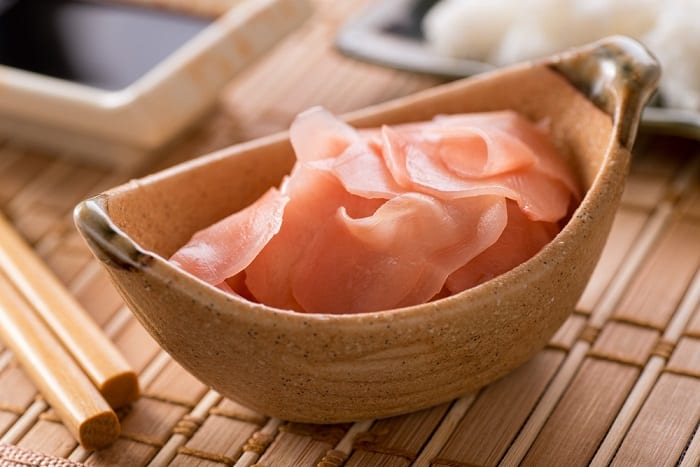 Made from thinly sliced ginger, gari is pickled in rice vinegar, salt and sugar, typically for a few hours to a couple of weeks. Easily recognised by most, gari is often served alongside sushi as its sweet and sour flavour makes it a refreshing palate cleanser. 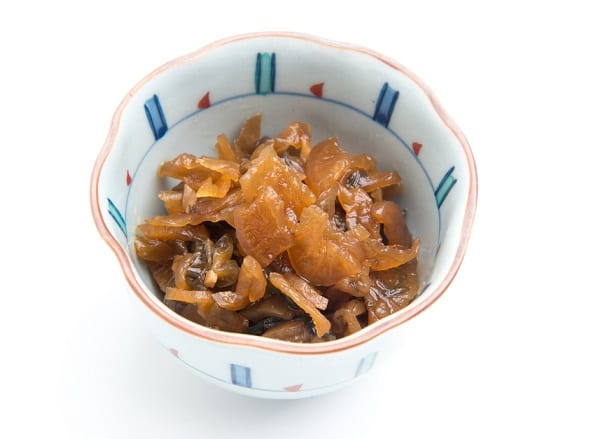 Literally “lucky god pickles”, a reference to the seven gods of fortune in Japanese mythology. Following its namesake, variations of fukujinzuke use seven types of vegetables, commonly lotus root, daikon, cucumber and eggplant, pickled in soya sauce and mirin. Crunchy and subtly sweet, it is a popular accompaniment to Japanese curry. 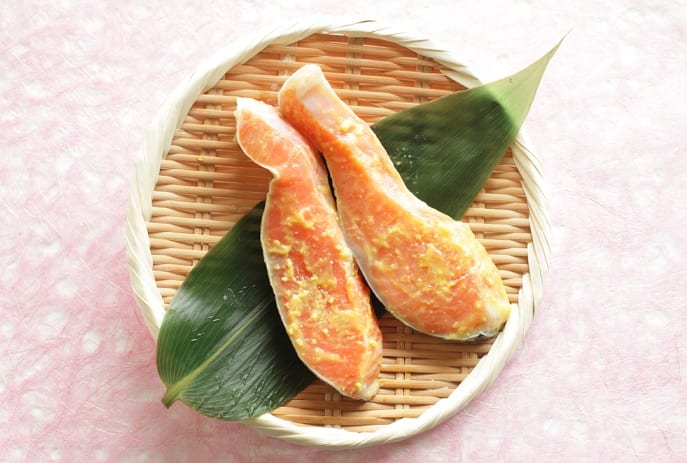 Another Kyoto tsukemono variant, sliced fish is preserved and marinated in saikyo miso (white bean paste). Slices are broiled or grilled, and served hot or at room temperature. Cod, Spanish mackerel or sable are typically used, with the miso providing a sweet, caramelised flavour.