With the paddy field as a canvas, what can you create?
Koyu Suzuki, village chief of Inakadate in Aomori prefecture, shares the story behind his quaint town’s incredible invention: Tanbo art.

For a long time, we were racking our brains. Inakadate isn’t located near a mountain or the sea; what could our village possibly offer that would help revitalise our town and attract visitors? Twenty-three years ago, we found the answer. You see, in 1981, there was a momentous archaeological breakthrough – an ancient rice field dating back to the Yayoi Period around 2,000 years ago was discovered in Inakadate, which suggests that our village was one of the earliest to adopt rice cultivation in Japan. To honour this historical discovery, we decided to develop a first-of-its-kind attraction that centres on rice. That was how the idea of tanbo (Japanese for “paddy field”) art came about in 1993.

Every year around November, members of the public will submit design ideas to my committee in charge of tanbo art. The final selection will be seen side by side in the following year’s display – one on a 15-hectare paddy field, and the other on a 10-hectare paddy field. We do get requests from TV and movie production companies; our most recent tanbo art features Shin Godzilla, a Toho production that is slated for release this year. Some of our other notable past tanbo art designs include Gone with the Wind, Star Wars, Marilyn Monroe, as well as important Japanese warriors.

Once the two designs for the following year have been finalised, the next step is the most crucial part of the entire process: scaling up the designs on the fields, measuring and marking the outlines of the designs, and deciding on the types of rice fill the outlines. Typically, we plant 12 different kinds of rice to create seven dye-free colours, from dark red to light green. After the outlines have been plotted out on the fields, that’s when we start planting the rice, usually around May. Approximately 300 people are involved in the planting process, some of them from other parts of the country, including ministers from the central government!

We have specially erected a 22-metre tower with an observation deck from which you can view the tanbo art in its entirety. The viewing period for the public starts from mid-June to right before the rice is harvested in October, but the best time to visit is between the beginning of July and end-August because that’s when the colours of the rice are most distinct.

The Best Is Yet To Be 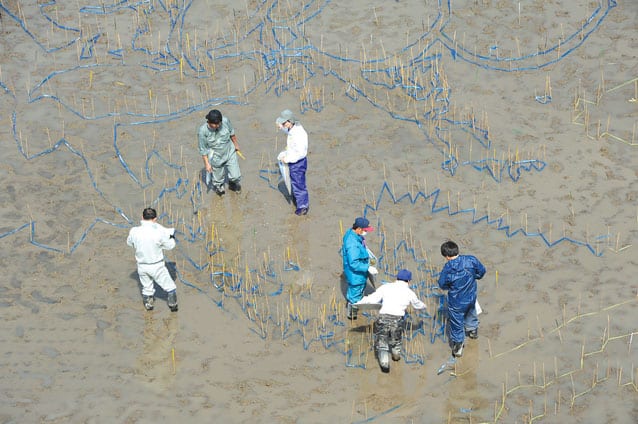 In my 12 years as Inakadate’s village chief as well as the head of the tanbo art committee, I have observed that the team gets better and stronger every year. My personal favourite design so far has got to be Gone with the Wind in 2015 – you can easily make out the expressions on each face as they are so remarkably detailed. This goes to show the high level of dedication and expertise of the tanbo art committee.
We are heartened to hear that we have inspired other villages to create their own tanbo art. After all, tanbo art is the pride and joy of Inakadate; it would be our privilege to share our knowledge of our craft with others.