There are more than 8,000 species of seaweed in the ocean. We explore three well-loved varietals!

A ccounting for more than 10 percent of the average Japanese diet, seaweed is an integral component of Japanese cuisine. But did you know they are not exactly plants?

Seaweeds photosynthesise like flowering plants but they don’t have roots, leaves, flowers or stalks. Instead, they are marine macroalgae that attach themselves to rocks through holdfasts, and get their nutrients straight from the water around them. In general, they can be divided into three categories: red, brown and green.

Whichever the category, they are all nutritionally rich. Just a gram and you have your daily-recommended dosage of iodine. It is also an excellent source of soluble fibre that is lower in cholesterol. Still not convinced of its health benefits? Okinawa contains more centenarians per head of population than anywhere in the world. Well, one of the reasons for their long lives is attributed to a large intake of seaweeds!

Seaweeds have been an integral part of Japanese food culture since prehistoric times – remains of marine algae are often found with shells and fish bones in relics of ancient inhabitants in Japan as far back as 300 BC. This suggests that sea vegetables might have an even longer history as a food source than rice in Japan. 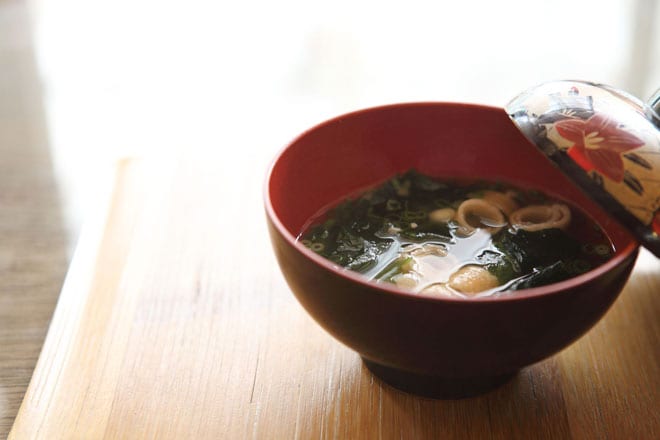 By AD 701 under the Law of Taiho (one of Japan’s earliest legal codes), some seaweeds including kombu and wakame were an acceptable form of tax payment. And by the 8th century, the oldest existing anthology of Japanese poetry, the Manyoshu, reveals that wakame was used as offerings in sacred rituals and served to nobility.

Seaweeds only became part of the average Japanese’s diet when artificial propagation techniques were developed, and supply was no longer susceptible to pollution or natural disasters. The first record of artificial propagation of seaweed through transplantation was in 11th century, but it was only till the mid-Edo Period (1603-1868) that large-scale seaweed cultivation was successful.

In the below link, we highlight three common varietals.