The Sapporo Snow Festival has come a long way since it was started by teens 70 years ago.

Japan’s northernmost city, Sapporo, host of the 1972 Winter Olympics, is a freezing place in winter. If you can’t ski or ice skate, there isn’t much to do except watch snow fall, dig your driveway clear of snow and watch more snow fall! So what do you do if all you have is snow? You hold a snow festival! 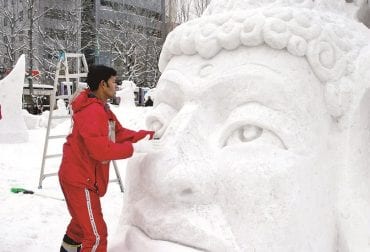 That’s what a bunch of teenagers decided to do seven decades ago. In 1950, local high school students built six large sculptures of snow and ice in Sapporo’s centrally located Odori Park. It began to be held yearly and became the Sapporo Snow Festival as the size and scale of the snow sculptures and events grew over the years.

Today, the Sapporo Snow Festival is staged on three separate sites across the city. At the 1.5km-long Odori Park venue, you’ll find about a dozen large and over 100 small-scale snow statues along with concerts and events. Close by, over 100 ice sculptures adorn the streets of the downtown Susukino entertainment area, while yet another 40 or so as well as snow slides and snow rafting can be found at the family-centric Tsudome venue. 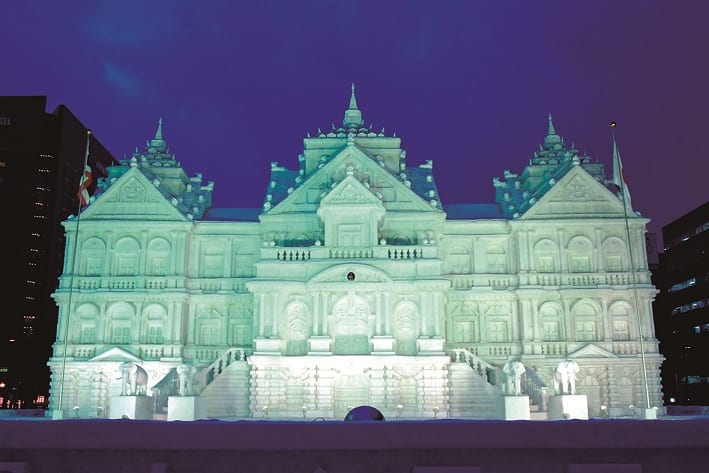 The snow and ice sculptures are carved in such intricate detail, you’ll marvel at the ingenuity and talents of their creators. Some are huge too, with several measuring more than 25m wide and 15m tall. At Odori Park, for instance, performances are even staged on the sculptures. 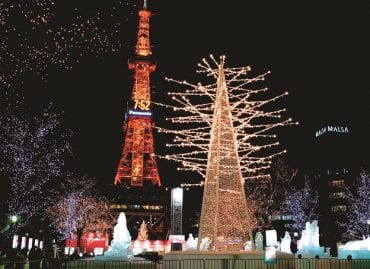 Every year, more than two million curious visitors from Japan and around the world visit Hokkaido’s capital for the festival. And this year promises to be bigger, better, colder and whiter than ever before: In 2020, the Sapporo Snow Festival celebrates its 70th anniversary!

The 2020 Sapporo Snow Festival runs from 31 January to 11 February, depending on the site. It is free to enter and is illuminated at night until 10pm.
Visit www.snowfes.com/english/ for more information.

Kiyono Okagawa (Instagram: @kkkiyofude) is a Tokyo artist and Tsutefude lecturer who created this calligraphy artwork of the Sapporo Snow Festival specially for OISHII. Tsutefude is a calligraphy technique believed to convey positive messages.

Text: Chris Glenn An Australia-born, Nagoya-based radio DJ, TV presenter, writer and 27-year resident of Japan. He specialises in samurai history and culture, and is the Nagoya Tourism, Culture & Exchange Special Ambassador, as well as the
Sekigahara Battlefield Ambassador.