Explore this tiny isle just o the coast of the Chita Peninsula in Mikawa Bay.

Just a 10-minute ferry ride from Morozaki Port in Minamichita, Himaka Island or Himakajima is so small that it takes only about 30 minutes to drive around.
The 1,900-strong population either work in fishing or tourism. A popular summer destination for domestic tourists, people come from all over Japan to enjoy the beaches, snorkel, windsurf, dig for clams and savour fresh seafood.

Swing over the sea 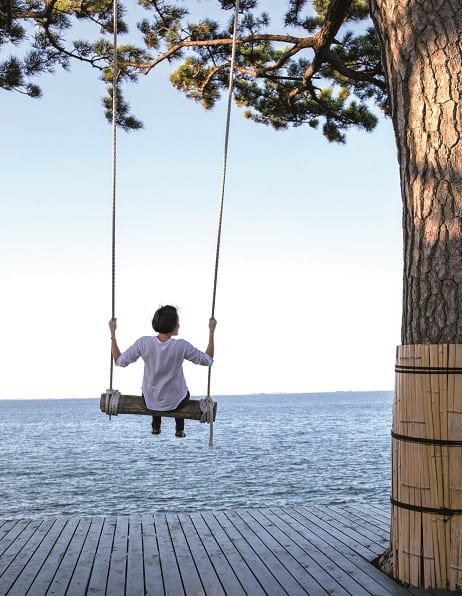 Up on a small hill near Sunrise Beach is one of the island’s most Instagrammed spots.
Called Heidi’s Swing or Lover’s Swing (and it can seat two at a push!), it offers visitors the exhilarating experience of sitting in the dappled shade of a tree and flying out over the calm blue waters of Mikawa Bay.

Spot the octopus and the pufferfish

The island’s undisputed mascot is the octopus, with the pufferfish coming a close second. Even the manhole covers here (left) are festooned with an engraving of tako or fugu. The tiny museum features the pots traditionally used by fishermen to catch octopus (above) as well as displays of fugu art, crafted from exquisitely thin, translucent slices of pufferfish. And of course, both tako and fugu feature prominently on restaurant menus here.

Dry your own octopus

Many seafood shops on the island offer tourists a taste of what it’s like to prepare octopus. The experience involves cleaning a large raw octopus, cutting and slicing it to remove its eyes and brain, then rubbing it liberally with salt before washing it thoroughly under running water. After that, it is marinated in a mixture of soya sauce, sugar and sake, before being hooked up and dried — stretched out to the full width of its tentacles. From May to July, when winds are high, drying can take only a day.

These must-have food souvenirs from Himaka Island are inspired by octopus and oranges.

Don’t let its name fool you. This sweet, spongy cake isn’t filled with octopus but smooth red bean paste. Named for its shape, not its taste, tako manju is probably the island’s most famous edible souvenir. People come all the way to the island to buy them from Kamome Baiten, a shop offering local snacks. Made fresh at the shop (you can watch the automated process through the glass window at the front), tako manju is packed into boxes of six or 12. Here, the adorable cakes are shaped like mini cartoon octopus. If you’re lucky, you might find one or two shaped like pufferfish in your box. 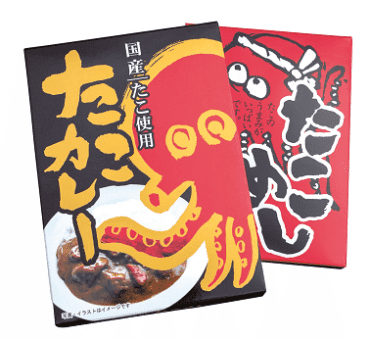 Tako meshi – Raw and marinated octopus is cut into chunks and stirred into this ready mix. Just drop the mix into your rice as it is cooking to add the island’s inimitable flavour to your everyday meal.

Tako curry – This convenient curry paste features chunks of boiled octopus from Himaka Island. Place the whole sachet in boiling water for three to five minutes. Then pour it out over steaming white rice and you have a meal to remind you of your time on the island. 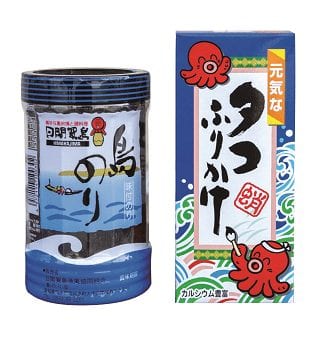 This traditional Japanese seasoning is made of dried octopus, sesame, potato and seaweed.
Sprinkle it over your rice to perk up its flavour.

A popular drink in the region is mikanshu no sake, or tangerine sake.
Fresh oranges grown in the area are squeezed and mixed with alcohol.
The result is refreshing and citrusy, and pairs perfectly with the region’s fresh seafood.

Made in Handa city specially for Himaka Island, this sake has a fresh fragrance, a fruity flavour and is extremely easy to drink.