Heart of Darkness is a prolific brewery and has made over 400 beers since its inception. 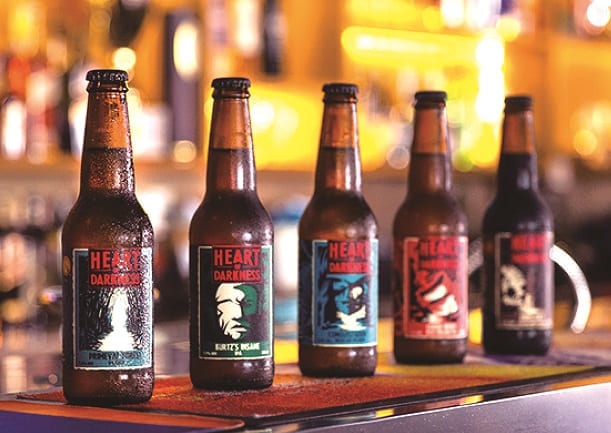 With names such as Primeval Forest Pilsner and Kurtz’s Insane IPA, the beer line-up at Heart of Darkness reads more like a movie catalogue or fantasy game than a menu.

This is not surprising, given that the gastrobar was named after a classic Joseph Conrad novel about a sailor’s journey up the Congo River. Partner and CEO John Pemberton and Head Brewer Duane Morton are both avid readers and travellers, and this inspires many of their creations.

An award-winning brewery that’s created more than 400 beers since its inception, Heart of Darkness also gets some of its creative energy from collaborations with international breweries such as Evil Twin, Two Roads, Behemoth, Fourpure, Gweilo and Magic Rock as well as local breweries such as Brewlander, That Singapore Beer Project, Daryl’s Urban Ales and Rye and Pint.

In January 2020, two new golden brews will be introduced as part of the gastrobar’s core range — the Sunset Kumquat Pale Ale and Mellow Pomelo IPA. Their bright fruity notes are perfect for the hot tropics.

Like cuisine, many of these beers are seasonally inspired and feature ingredients at their freshest. These include a special edition Hot & Cold Chilli Pilsner enlivened by a touch of heat from Vietnamese chilli and a Gliding Dusk Passion Fruit beer that will also be available
in January.

No wonder it is nearly impossible to try Heart of Darkness’ full range within a single session. To cover more ground, order a flight for sampling or ask bar manager Desmond to make recommendations and suggest food pairings. With such unique characters, ingredients and names, Heart of Darkness has a beer for literally every personality type, time of day, weather and mood.

HEART OF DARKNESS is at 55 Tras Street Singapore.
TEL: 6208-7940
heartofdarknessbrewery.com