There’s something quite remarkable about Koto City. One of the 23 special wards of Tokyo, Koto City is the result of a merger between Fukagawa and Joto Wards in March 1947. Over the years, the city has expanded through land reclamation from Tokyo Bay, making way for an increasingly urban landscape with high-rise residential and office buildings — a wonderful juxtaposition to the inland, which maintains a traditional vibe reminiscent of the Edo era.

Speaking of traditions, a cannot-miss annual event at Koto City is the Fukagawa Hachiman Festival, also known as the Mizukake Matsuri, or water-splashing festival. It’s held in mid-August every year at the area around Tomioka Hachiman Shrine, the largest Hachiman shrine in Tokyo established in 1627. One of the three major festivals of Tokyo, Fukagawa Hachiman Festival attracts hordes of locals and visitors every year. But once every three years, the festival scales up to become Hon-matsuri, the main festival, which involves 30,000 people dressed in happi – a traditional costume that harks back to the Edo era (1603 – 1868) – and over 300,000 spectators. This event is so massive, even the Emperor and Empress of Japan made an imperial visit to Fukagawa in the past! The next Hon-matsuri is happening this year in August, so do check it out if you are going to be in Koto City then.

Adding another layer to Koto City’s dynamic spirit is its people. A closely-knit community with a genuine commitment to improve and showcase their city to the world, their warmth and passion are palpable — an energy heightened by the upcoming Tokyo 2020 Olympic and Paralympic Games, what with most of the sporting venues being located at Koto City.

Over the next few pages, you will not only be able to take a peek at Koto City’s unique character that is a seamless fusion of old-school nostalgia and futuristic smarts, but also hopefully be touched by the kindness and kinship of the locals. 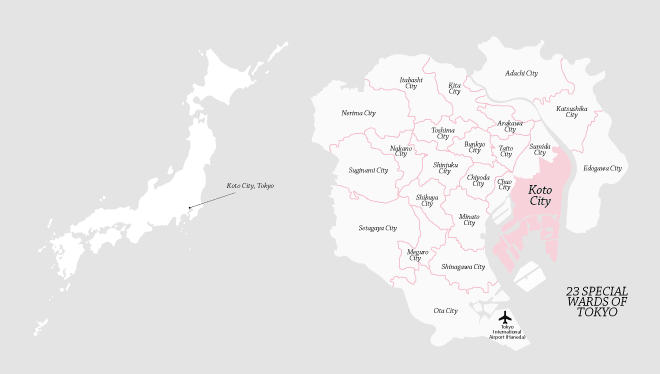