Ring in the New Year

“In Japan, ushering in the New Year is a big thing and we usually celebrate by enjoying premium ingredients that we wouldn’t normally have at other times of the year. That is why I’m using Matsuba crab, or snow crab, which is a speciality from Tottori Prefecture. We also traditionally use the colours white and red for celebratory occasions, so I made sure to incorporate these elements into the dish as well—red from the crab and white from the maitake mushroom. 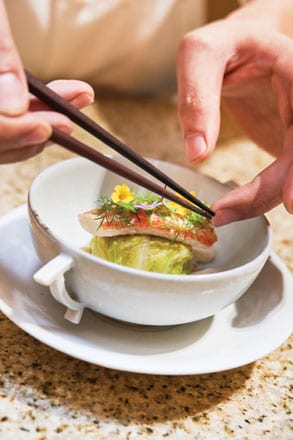 I love working with ingredients that are in season. The crabs are in season till the end of February, so I knew I wanted to use them to create a new dish at ESORA. I took about three days to come up with the recipe for Matsuba Crab Soup. In Japan, the crab is usually boiled or steamed, but I find that it’s a shame to not enjoy the full flavour of the whole crab. So I decided to boil the crab to make crab dashi, using a little salt and some soy sauce. 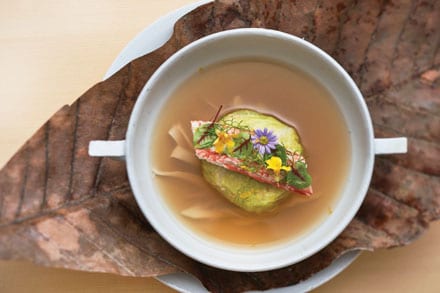 I used the crab meat to make a type of shinjo, or crab cake. However, while traditional shinjo is usually harder in texture, the crab flakes are quite soft, so I wrapped them with hakusai, or Chinese cabbage. The crab was seasoned with some yuzu and fennel, which is unusual for Japanese cooking but is a very classical French combination.
This dish illustrates my approach to cooking. I feel that I should always open my mind and do things a little differently. The inspiration for my dishes comes from looking at ingredients from different angles. Sometimes you have a set idea of how certain ingredients should be used, but if you free yourself from those boundaries, you can come up with new and exciting ideas.”

Chef  Shigeru Koizumi
ESORA chef-owner Shigeru Koizumi was formerly from the three Michelin-starred Nihonryori RyuGin in Tokyo where he spent five years, as well as the two Michelin-starred Odette in Singapore where he worked for almost one year. The 34-year-old Nasu, Tochigi, native now helms ESORA, which celebrates fresh, seasonal produce cooked simply to showcase its flavours. Koizumi describes his style as traditional, yet with a modern touch, and wants his guests to be able to experience “outside the box” Japanese cuisine.