A dash of DASHI

Japan has always thrived on agriculture, with the cultivation of rice and other crops in its fields. Many wonderful ingredients are also drawn from the wisdom of fermentation and invoke the umami taste discovered by the Japanese. Traditional Japanese food is a product of the
interweaving of natural and dazzlingly handcrafted ingredients — part of the rich food culture that Japan prides itself on. 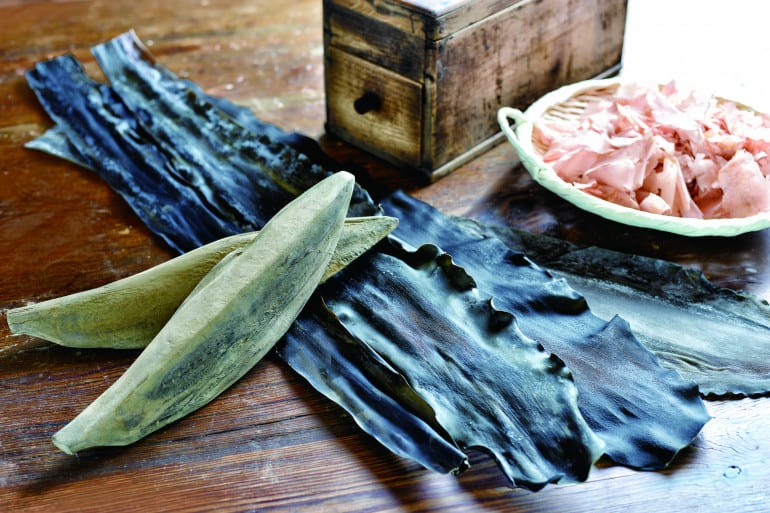 We live in a time when you can eat anytime and anywhere, but the tradition of having a loving, home-cooked meal at the family dining table and eating it together is important for the nurturing and education of a child. This tradition also plays a vital role in strengthening family bonds. Over the next few issues of OISHII, I will share the appeal of Japanese home cooking.

To kick-start this series, let’s talk about dashi, the epitome of umami flavour. Originally, four basic flavours — sweet, salty, sour and bitter — determined the taste of food. In the early 20th century, scientists added umami, which is now the fifth flavour and essential in Japanese food.

Kombu (kelp) and bonito (also known as skipjack tuna, or katsuo in Japanese) are abundant umami ingredients, and are key in traditional
Japanese dashi.

We also know that umami has a synergistic effect. Adding two different flavours at the same time increases the umami by many times. The
combination of kombu, rich in glutamic acid, and dried bonito flakes (katsuobushi) that are laden with inosinic acid is the strongest combination and the foundation of Japanese food.

Here’s a closer look at three different dashi recipes that are full of umami: basic dashi made from water, kombu and dried bonito flakes, a
seasonal vegetable agebitashi (literally meaning “fried and soaked”) dish, and a dashi-infused Japanese omelette.

METHOD
1. Clean the surface of the kombu with a damp cloth.

2. Add the water and kombu into a pot, and let the kombu soak for more than an hour.

3. Heat the kombu mixture. When small bubbles start to form at the base of the pot, turn off the flame and remove the kombu.

4. Heat the mixture again. Turn off the flame when it starts to boil, then add dried bonito flakes and leave to simmer for 2 minutes.

5. Strain the dashi with a fine-mesh sieve and scrape off the bonito flakes with a cloth or kitchen paper towel.

*tip – Awase dashi or basic dashi can be stored in the fridge for about 2 to 3 days. 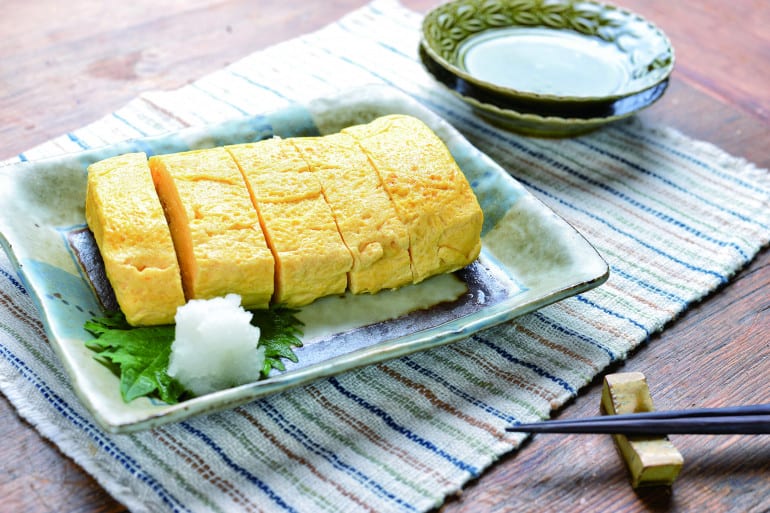 Method
1. Beat the eggs in a bowl, then add dashi, mirin and light soya sauce, and mix well.

2. Heat the tamagoyaki frying pan* over medium heat. Using a kitchen paper towel, lightly rub vegetable oil over the surface and sides of the pan.

3. Pour a large scoop of egg mixture into the pan so it covers the surface in a thin, even layer. When the egg is cooked underneath, use a pair of chopsticks to gently roll the egg forward to the opposite end of the pan.

4. Repeat Step 3 until there is no more egg mixture left.

*If you don’t have a tamagoyaki frying pan, you can use a square-shaped and non-stick frying pan. 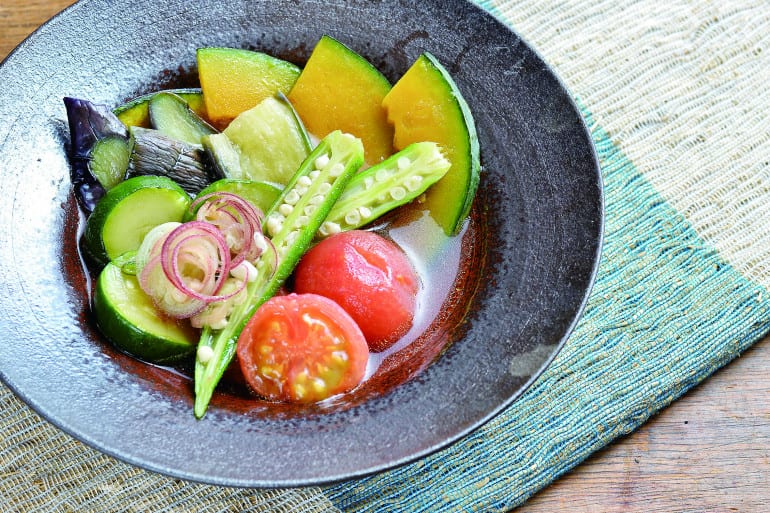 Method
1. Remove the stem from the eggplant. Cut the eggplant in half, then slice vertically into 4–6 pieces. Soak in water for 10 minutes.

2. Remove the stems from the okra.

3. Cut both ends from the zucchini and slice into 1cm-thick rounds.

4. Remove the seeds from the pumpkin and dice into 6–7mm pieces.

5. Boil the tomatoes, then remove from the water.

6. Make a long incision in each chilli pepper.

7. Combine Mixture A ingredients in a large bowl.

8. Heat the cooking oil over high heat and deep-fry the cut vegetables (no need for batter).

9. Soak in Mixture A and chill in the refrigerator.

In this four-part series, food expert and nutritionist Aya Osada sheds light on the most essential ingredients of Japanese home cooking. First up, the basic broth known as dashi.

Japan Food Expert strongly believes in the concept “to eat is to live”. This is a company that cherishes the environment, nature and the bonds of people. Their top priority is creating and spreading health and happiness through rich cuisine.
Website: https://imakoya.com/
In cooperation with Yamahiko, Co. Ltd. and Sakai Shoten Ltd.