Author CLARA CHOW reflects on travel and the season’s “bittersweet tang” in these uncertain times.

Perhaps the last time you saw Japan, green was still clinging to the foot of Mount Fuji, holding red autumn foliage at bay. Or perhaps maple leaves of red, orange and gold were already ablaze, licking at Kodaiji Temple. Perhaps you strolled in an imperial garden after a sudden downpour, canary-hued ginkgo leaves on wet paths sticking to your shoes. 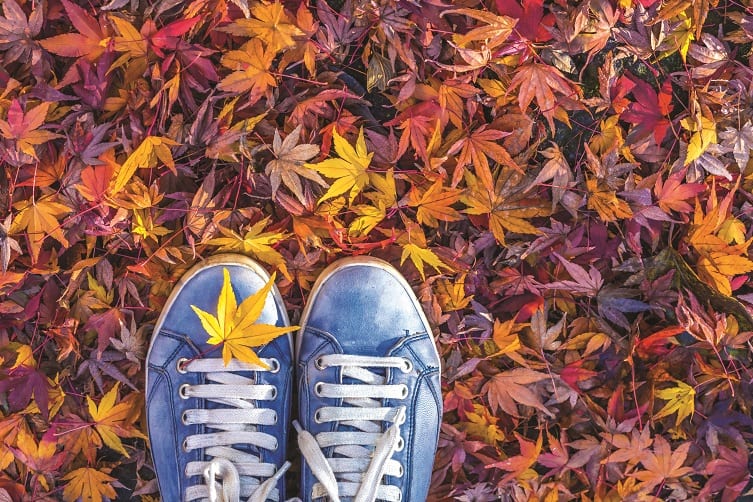 Autumn in Japan is known for koyo (“autumn colours”) and the attendant ritual of momijigari (literally “red leaves hunting”; visiting areas to view the red leaves) with its roots in Shinto and Buddhist religions. Edo-era artist-poet Ogata Kenzan penned these lines on a scroll depicting autumn ivy:

However gorgeous the painted leaves
Autumn is not mine to say.
How I begrudge the wind in the pines
That too soon scatters the crimson.

While both the viewing of sakura and momijigari are traditions acknowledging the ephemeral nature of life, there is something more melancholic in the slow shedding of red-brown leaves, as opposed to the delicate rain of pink petals. “[Autumn] is a time of pensiveness and introspection, of offerings to the harvest moon and quiet meditation on maple trees and chrysanthemums,” wrote The New York Times, on the occasion of an art exhibition dedicated to the seasons at the Metropolitan Museum of Art in 2011.

Indeed, both classical and contemporary literature in Japan are rife with references to the bittersweet tang of autumn; that drawing close of the soul as the weather turned cool and the nights lengthened.

The 11th-century novel, The Tale of Genji, has a chapter “An Autumn Excursion” in which the eponymous hero accompanied the emperor and his court to Suzaku palace in the middle of the 10th month. There, music came from boats rowed out over lakes; reeds, strings and drums echoed on the grounds. The falling leaves of multiple hues had “an almost frightening beauty”. Genji wore a maple branch in his cap, which a general replaces with chrysanthemums touched by frost. He danced. When his dance ended, “a chill as if from another world passed over the
assembly”. Everyone is moved to tears.

There is a sense of foreboding and inevitability, which heightens every shred of the present. Perhaps this Heian period description of autumn has extra resonance in our present times of pandemic, death, fear and uncertainty. In the face of impending darkness, we move with grace and empathy.

Or consider: “As the autumn deepens, the fathomless lakes of their eyes assume an ever more sorrowful hue. The leaves turn colour, the grasses wither; the beasts sense the advance of a long, hungry season. And bowing to their vision, I too know a sadness.” These lines from Haruki Murakami’s Hard-Boiled Wonderland and the End of the World, a novel about the slow decline of a man’s mind into a phantasmic prison, lays bare that the melancholy for autumn is as much for the natural world as it is for our psychic selves.

Perhaps the next time you see Japan, the world is once again fresh and safe — the summer Olympics in Tokyo concluded without a hitch. Perhaps as you sit outdoors at tsukimi (moon-viewing party), snacking on dango (sweet glutinous rice on skewers), you will catch a star-shaped vermilion leaf in your hand and fold it fiercely in your fist.