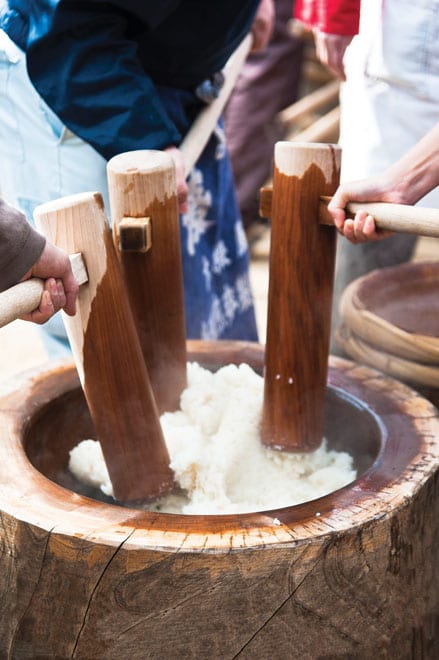 Smooth, sticky and chewy—it is hard not to love mochi! One of Japan’s quintessential foods, mochi is commonly used in local cuisines as rice is a staple food. This traditional rice cake is made of glutinous rice that is first steamed then pounded into a sticky paste and moulded into shape.

Usually eaten while still soft, mochi can also be cooked in different ways when it becomes dry and firm. The easiest way is to grill it (isobe make), flavour with soy sauce and wrap in toasted nori seaweed.
Another simple but sweeter version is to roast mochi and top it with kinako soy flour. And if you deep-fry mochi, it will become a crunchy snack called okaki, puffed up in irregular shapes.

Although mochi is eaten all year round, it is also a traditional food during the Japanese New Year. Mochi is used as a New Year decoration as moon-shaped kagami mochi and later served in a special soup called zoni.

Mochi-making is also a wonderful communal activity during the New Year. Because making mochi by hand is so labour-intensive and time-consuming, fresh mochi is usually made by ordinary people on these special occasions. Family and friends get together to make mochi in the ancient mochitsuki ceremony, which can take up to a full day.

Early in the morning, glutinous rice is steamed, then pounded into a paste using large wooden mallets in a traditional usu or hollow tree trunk; the rhythmic pounding is a common sound of the New Year. It is said that the quicker the mochi is pounded, the tastier the mochi! Handfuls of the sticky paste are then moulded and pinched into shape in batches.

Outside of the New Year, machines make most of the mochi in Japan, although some Japanese households have their own electric mochi maker to make these chewy treats.

In Japan, dried mochi is sold ready-made at supermarkets. If you’re buying fresh mochi, it will be available either as sheets or round cakes, depending on the region. In eastern Japan, like Tokyo, mochi is cut from large sheets; in western Japan, like Hiroshima and Kyushu, mochi tends to be round and disc-shaped.

Here in Singapore, you can easily buy mochi and even kagami mochi at Japanese supermarkets. One tip: mochi cakes should be soft to the touch. If they feel hard, you can soften them by soaking them overnight in cold water.
Want to know more about mochi? These are some of the most essential mochi foods.